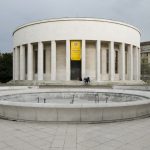 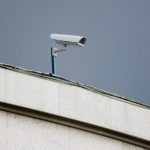 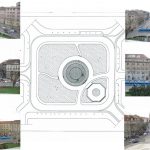 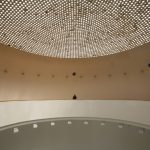 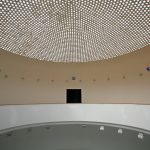 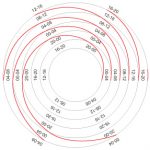 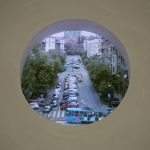 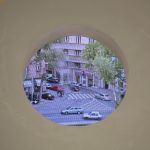 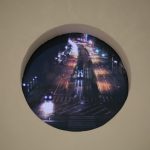 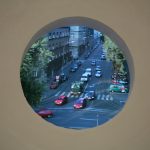 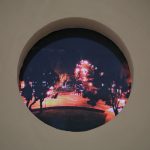 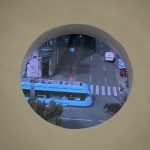 The project follows the coordinates of the exhibition space in its architectural and structural sense.

The circular wall of inner ring of the Meštrović’s pavilion (PM Gallery) contains six air vents, 80 cm in diameter, positioned at a height of 4 m. The vents are intertwined with hidden channels behind the gallery wall. Two of the vents have exits on the dome.

Six cameras placed on the dome recording the traffic, the roundabout around the pavilion, are connected to six monitors set within the openings of the vents in the gallery.

Each monitor shows a four-hour long time period. One screen always shows the real time, whereas the other five show what happened in the previous 4 to 24hours. Simultaneously, the monitors show recorded materials in sequential period with the time difference of 4, 8,12,16 and 20 hours.

Meditating upon time St. Augustine in his Confessions made a startling revelation which still, despite scientific developments, has not lost its ingenuity – “If no one asks me, I know what it is. If I wish to explain it to him who asks me, I do not know. Yet I say with confidence that I know that if nothing passed away, there would be no past time; and if nothing were still coming, there would be no future time; and if there were nothing at all, there would be no present time.”[1] With her site specific video installation Crossroads Karolina Pernar is going to visually unravel Augustine’s paradox by turning a period of one day back in time and “dismantling” its parts into the 4-hour zones, whose 6 manifestations are being marked by the 24-hour trajectory of Earth around the sun.  In this process, the past becomes a juxtaposed part of the present in which various durations are being synthetized and incorporated in a circular formation which again spatially emphasizes the cyclic structure of time.

When a French philosopher Gilles Deleuze in his book on Bergson analyses the ontology of temporality, he particularly draws his attention to the coexistence of different time levels – “The past and the present do not denote two successive moments, but two elements which coexist: one is the present which does not cease to pass, and the other is the past, which does not cease to be, but through which all presents pass.”[2] In other words, each present goes back to itself as past, as a continuity of memory which becomes the guarantee of existence and vitality of present. In Karolina’s case, memory as duration is being broken down into visual sequences shot and broadcast live (with a time lapse of 4, 8, 12, 16 and 20 hours) by 6 surveillance cameras which “monitor” crossroads around the gallery. Panoptic situation in which urban space is being presented to the eye of the beholder, creates an atmosphere of an asylum where the traces of past are not being erased but repeatedly restored and circled around on the screens. Accumulated time becomes the testimony of duration/memory actualized as a print of something that has apparently disappeared. However, thanks to the duplication throughout the show, this lost time gains a foothold in the present which absorbs, eliminates all distances between “then” and “now” and is anchored in these elusive few hours of a time lapse, which are then made present as a delayed moment. By disintegrating the present, Karolina creates a strange paradox and a hole in time. It seems as if it is irrevocably metastasizing towards past instead of future.

“I have always been fascinated by the theory of relativity problems”, admits the artist. “You know the case when I am on Earth and you are flying in a spaceship at the speed of light. While up there you spend, for example, 2 months, I get 20 years older, says Einstein. That is really amazing!” Karolina incorporated the microtheory of relativity into the idea of Crossroads in an absolutely implicit way because I will never see myself again the way I am now, but only in a form of some phantom few–hour–old picture. And then, when I watch on the screens cyclically repeated past, out of which all of my disappearing present is made, I will again remember St. Augustine – “But I have been torn between the times, the order of which I do not know, and my thoughts, even the inmost and deepest places of my soul, are mangled by various commotions until I shall flow together into thee, purged and molten in the fire of thy love.”[3]